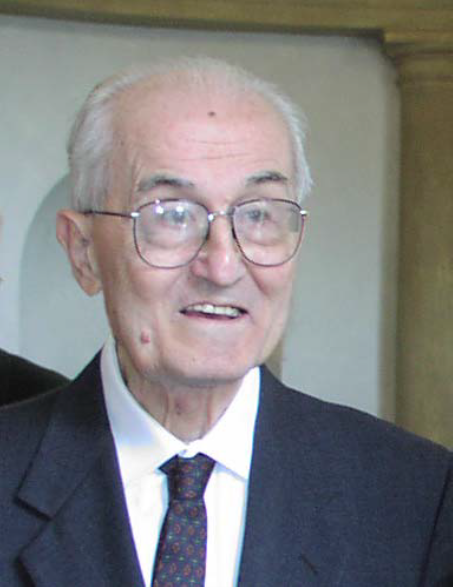 We thank the authors for sharing these precious memories and historic insights for the whole IFToMM community.

Giovanni Bianchi, scientist, university professor and Past President of IFToMM, passed away on 13th November 2003, in Milan.
Born on 11th March 1924, in Como, he registered at the Faculty of Mechanical Engineering at the Politecnico di Milano and, after obtaining his degree, obtained a Master in Mechanics from Cornell
University – Ithaca, New York, where he studied the propagation of shock waves in metals, publishing some articles that are well-known in literature. On his return to Italy, he began working at the Politecnico di Milano, where he dealt with mechanisms and vibrations from a mathematical
and experimental point of view with results that, in 1970, enabled him to take on the chair of Mechanics Applied to Machines. More recently, he was appointed Professor Emeritus.
Giovanni was a founder of institutions and a maker of people and scientists. He contributed to the founding of IFToMM when the energy involved in creating innovative international cultural interchange required tenacity, faith and creativity. The idea of a scientific basis for machine
mechanics and mechanisms was developed in Zakopane, a project to which Giovanni dedicated both passion and commitment. For many years he acted as General Secretary and President of IFToMM and is remembered by everyone for his innate ability to propose ideas and promote
culture. Within the context of IFToMM, in conjunction with his friend Adam Morecki, he directed the Robotics Committee, proposing the Romansy Symposiums, a reference point, from 1972 until now, for scientists, academics, designers and researchers. Giovanni held the position of General Secretary of the Italian Association of Theoretical and Applied Mechanics (AIMETA) from its foundation in 1965 until 1982, contributing to the creation of the International Journal MECCANICA and acting as its President from 1982 to 1986. He was also the Italian representative of the International Union of Theoretic and Applied Mechanics (IUTAM).
From 1977 to 2000, he was General Secretary of the International Centre of Mechanical Sciences (CISM) in Udine. When programming and organizing courses, seminars and international conventions he was totally committed to maintaining not only a high scientific level but also a contemporary view of the subjects dealt with, thus ensuring the international prestige of CISM.
The development of activities in innovative sectors related to his studies and interests, such as Robotics and Biomechanics, is due, above all, to his work.
His research activity meant that more insight was gained into the fields of linear and non-linear mechanics, mechanisms, articulated systems, robotics and system dynamics. On a more general level, he dealt with the most innovative aspects linked to mechanics.
Giovanni regarded knowledge and action as a means of communicating with others, thereby offering all those involved the best of all worlds. Creating study and research centres, indicating possible guidelines, offering new approaches to know-how and consolidating them with simplicity
is just one way of laying solid foundations for human thought and Giovanni Bianchi, with his serene, humble, simple and humane approach, was one of the main protagonists in the sector of mechanical sciences intended as a theoretical and concrete science.
His scientific interest was combined with his passion for music: a talented cellist, he enjoyed playing with friends, occasions which afforded him enormous spiritual harmony.
His strict scientific leanings were combined, as everyone will remember, with a warm personal approach. Wherever he found himself, there was always a magical word of advice. He reflected deeply on matters, always showing kindness, humility and depth. Many friends have been sadly affected by the loss of Giovanni. However, his enormous following
of scientists, young researchers, members of IFToMM, of Cism, of the Politecnico di Milano and of the international scientific community, will ensure that his memory lives on, the memory of a considerate, warm human being and scientist.

Supported by national and international associations, the conference brings together leading experts from the…